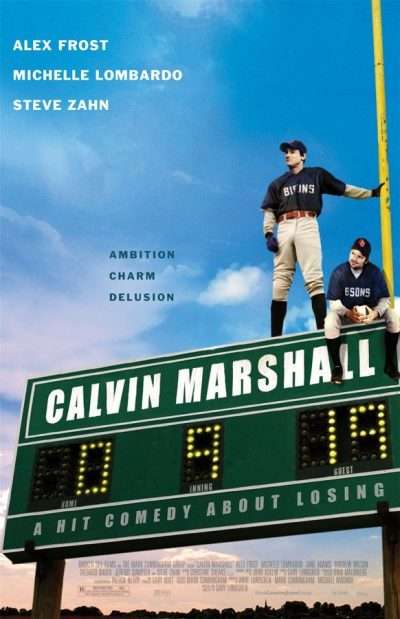 Fifteen years ago, Patrick Neary’s photography kept readers of The Olympian up to date on the news. Now, he’s a busy cinematographer working with Hollywood stars.

Tonight, he and writer/director Gary Lundgren will show their feature film, “Calvin Marshall,” at Capitol Theater, then answer questions from the audience after the screening. The baseball-themed film stars Steve Zahn, Alex Frost, Diedrich Bader, Andrew Wilson, Jane Adams and other Hollywood talent in a drama-comedy as they try to guide a clueless young college player with plenty of ambition but little talent.

Neary came to Olympia in 1985 to study filmmaking at The Evergreen State College. After graduation in 1989, he worked as a staff photographer at The Olympian. “At the time, I thought maybe that (newspapers) was the direction I would go,” Neary said in a phone call from his Portland home. But within that first year, he started shooting short films and low-budget music videos as well as freelance corporate films and commercials. In 1997, he left the newspaper to make movies his full-time career. He and his wife, Michele, relocated to Portland – a move more for the quality of life than a career decision.

“I would not call it Hollywood North,” Neary said, adding that maintaining a film career in Portland requires flexibility and the willingness to commute. It also required taking on just about any job. “When you’re starting out, you have to shoot everything you get your hands on. You want to make all your mistakes on tiny little no budget shorts,” Neary said.

However, living in Portland has its advantages. If he lived in LA, he says, he would probably be working on a “soul-sucking reality show, which is what everybody I know down there is working on.” A year after his move to Portland, he landed a job with “Critter Gitters,” a syndicated Saturday morning live action TV show about kids who work rescue animals in danger. Neary has shot half a dozen features in his career, but none has had the star power “Calvin Marshall” has.

“Calvin Marshall,” as conceived by its creator, Lundgren, was a reaction to the many stories about the one-in-a-million college players who go on to play professionally. “I always thought there needed to be a movie for the rest of us who don’t,” Lundgren said in a phone interview from his Ashland, Ore., home. The filmmaker himself is a former college ball player. Lundgren said “Calvin” is “not just a sports movie. It’s not just a guy’s movie. It feels like it has one foot in the multiplexes and one foot in the art houses. Hopefully, that’s a good thing and not a marketing nightmare.”

The film will officially premier in New York City on Aug. 20. South Sound audiences will be among the first to preview it tonight. It will come out on DVD and Video on Demand in September. The $2 million film was shot in late 2007 in Ashland, home of the Oregon Shakespeare Festival. Lundgren wanted an any-town and any-time feel. Ashland delivered with its charming visuals and new baseball field in nearby Medford. “I don’t think we could have recreated that in another town in the Northwest,” Neary said.

As for the look of the film and the performances in it, Lundgren wanted style as well as an organic feel and, he said, he knew Neary could deliver. “We’d been in the trenches before. He’s a great person to collaborate with,” Lundgren said of Neary. Lundgren said getting Steve Zahn to sign on was key to getting so much Hollywood talent on the set. “Once we got him, every other actor was willing to work for scale,” Lundgren said. “It was the first time I had worked with that much big-name talent under one roof, and it was a really good experience,” Neary said. “It was a very friendly work environment. We all got along and hung out after shooting every night.” Zahn’s arrival on the film was delayed (he was shooting “Management” with Jennifer Aniston and Woody Harrelson in Portland prior to “Calvin”) and that caused the Ashland shoot to be delayed in to winter. The relatively quick 25-day shooting schedule meant a lot of hustling because of the short days and cold temperatures.

Neary also works in television when not on film projects. He just wrapped up his first season on “Animal Exploration with Jarod Miller.”